Angular JS is one of the most popular frameworks when it comes to creating dynamic web applications and admin panel templates. It lets you use HTML as your template language and lets you extend HTML’s syntax to express your application’s components clearly and succinctly. AngularJS’s data binding and dependency injection eliminate much of the code you would otherwise have to write.
The popularity of the framework can be attributed to it being open source and backed by Google, easy development for creating single page applications, easy data-binding…
And what is Angular 2? At the end of 2014, Google announced that Angular 2 would be a complete rewrite of AngularJS. It is a component-based framework.
Angular 2 introduces some bold moves that might be surprising to those who aren’t familiar with the mobile web, but Angular 2 is strictly focused as a mobile-first framework, meaning that desktop apps and websites would need to be built in reverse order. Mobile is already surpassing all expectations, and as billions more get connected, it only makes sense that we build with mobile web in mind first.
The following list of Angular 2 templates can be helpful as a starter kit for admin panels for Angular projects. Check it out! 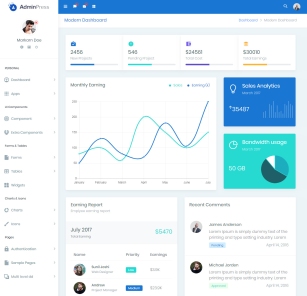